BioPen is a powerful tool that allow scientists to study the biophysical properties of lipid membranes and the processes connected to them in new ways. The capacity of BioPen to deliver small volumes to a precise location can be used to study the effect of different substances on lipid membranes with high spatial and temporal resolution.

Below is a series of examples where BioPen has played a vital part in studies of lipid bilayer systems. It shows some of the many capabilities of BioPen in the area of membrane biophysics, ranging from controlled, dynamic patterning of lipid films to aspiration and collection of lipid vesicles. You can find these and other articles presenting work using BioPen in our publications library. If you want to know more about how you can use BioPen in your research, please 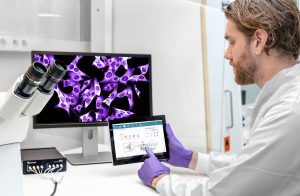 In the paper Molecular Lipid Films on Microengineering Materials   Jõemetsa et al. systematically study how the behavior of lipid films are is affected by the properties of the underlying surface on which they form. Understanding how surface properties influence lipid film behavior is important when using them as models for cell membranes or as part of bioanalytical devices. The authors use BioPen to obtain controlled delivery of fluorescently labeled small unilamellar vesicles (SUV) to the surfaces that they study. At the surface, the vesicles either stay intact or rupture to form lipid bilayers or monolayers, depending on the surface properties. In their paper, Jõemetsa et al. measure the degree of coverage, fluidity and integrity of the films and show a complex, systemic behavior governed by both the lipid membrane composition and charge, and the charge of the supporting surface. 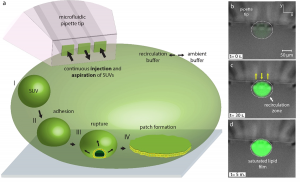 The ability to deposit lipid material in a controlled way using BioPen is expanded upon in order to create new types of bioanalytical devices, as described in Lab on a Biomembrane: Rapid prototyping and manipulation of 2D fluidic lipid bilayers circuits by Ainla et al.  The authors show that BioPen can be used, not only to create lipid films, by also to dynamically change the composition of the surface, erase selected parts of the lipid film and perform selective functionalization. This ability to dynamically affect the physical and chemical composition of lipid films constitutes a highly versatile platform to study chemical and biological processes in two-dimensional systems. Since BioPen can be used together with almost any microscope setup, this gives researchers freedom to design their experimental system in any way that they choose. 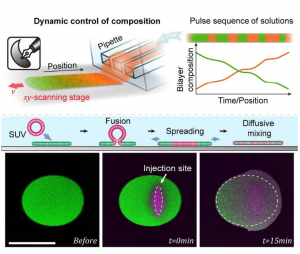 BioPen is not only useful to deposit lipid material to a surface, it can also be used to deliver substances to supported lipid bilayers or surface-adsorbed vesicles. In the paper Styrene maleic acid copolymer induces pores in biomembranes, Orwick et al. use BioPen to deliver styrene maleic acid copolymers (SMA) to supported lipid bilayers made of POPC, DMPC or soybean lipids, as well as to soybean or e. coli lipid vesicles. SMA copolymers are useful tools for solubilizing e.g. membrane proteins by extracting them from native lipid membranes to form disc-like structures. Orwick et al. show that when they add  SMA copolymers to both supported and free-standing lipid bilayers using BioPen, this results in the creation of pores in the membrane. Based on the capacity of SMA copolymers to form pores in the bilayer, the author suggest a process for lipid disc formation where the density of pores become high enough to allow lipid islands to form, which then spontaneously are converted to lipid discs.

Pore formation in lipid membrane is a process that is of great interest of itself. It is both an important mode of action for antibacterial peptides and a suggested part of the toxic properties of α-synucliein and a major factor in Parkinson’s disease. In all of these cases, BioPen can be used to obtain important mechanistic insight into the fundamental biological processes underlying these phenomena. 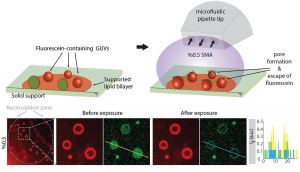 Lipid membranes are a fundamental components of biological cells and unraveling their properties can help us better understand how life appeared on earth. A recurring hypothesis is that spontaneously form vesicle-like structures, enclosing nucleic acids, constitutes a precursor to the biological cells. The ability of these protocells to grow and divide is governed, not by biological processes, but by the properties of the primitive lipid membranes themselves and the balance chemical composition of the vesicle interior and its surroundings.

In the article Nanotube-Mediated Path to Protocell Formation, Köksal et al. investigate the transformation of surface-adsorbed lipid deposits into vesicular compartments. In their paper, the researchers deposit large multilamellar lipid reservoirs onto SiO2 surfaces. Initially, the lipid material creates a cohesive lipid film that spreads as a double bilayer. Eventually, the double bilayer ruptures, resulting in a single lipid bilayers. In these regions, the authors observe the formation of numerous vesicular structures, connected through lipid nanotubes.

To investigate the individual vesicles that are formed on the lipid membrane, the researchers used BioPen. First, they subjected the vesicles on the surface to hydrodynamic flow from the BioPen in other to mobilize them. Since the vesicles were are attached to the surface through lipid nanotubes, the authors used BioPen to locally deliver a Ca2+ chelating solution in order to weaken the anchor points of the vesicles. Once the vesicles detached from the surface, they were then collected though the recirculation flow of BioPen.

Thanks to the design of the BioPen, where the recirculated volume is not discarded but instead is collected in waste wells, Köksal et al. were able to gather the aspirated vesicles for further analysis using confocal fluorescence microscopy. In some cases, aspiration of the vesicles resulted in the extrusion of lipid nanotubes from the lipid membrane source, which favors further vesicle formation.

The work by Köksal et al. suggest at process of protocell formation driven by access to membrane material under influence of a high-energy surface. Further, their work shows that mild agitation promote the nanotube formation, which, in turn, promotes further vesicle growth.

The work presented in this article serves as a great example of how BioPen can be used, not only to gather material, but also to collect samples. This capability means that when you image a sample under the microscope, the experiment does not have to be over. The sample-collecting capability of BioPen opens up a whole new world of downstream analysis, providing new ways of setting up experiments and doing research. 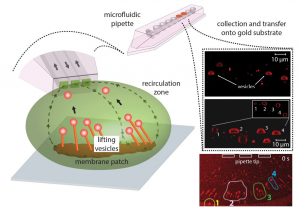